This is my story of my first nephew. Eric was my brother’s son. He was active duty United States Army with combat experience when he killed himself in Colorado on August 17, 2013.

Eric was born in March of 1986. The first of the new generation in any family always seems to have special status and Eric was no exception. From birth he had flaming red hair and huge dimples with an amazing wide smile. When Eric smiled or laughed, you couldn’t help but join in. These were defining traits that he kept into adulthood.

Eric was a beautiful and inquisitive child. He loved to learn and read. Early in his life, he loved being read to and would often speak up to ask questions or to point out a similarity to something else he recognized. I don’t recall exactly when he began reading but once he did, he read voraciously. He noticed everything and retained things well. Every book he read added to his knowledge and he could readily retrieve facts and figures from his reading. As a young adult, he became a huge fan of Tom Clancy novels as well as other authors in the genre.

Eric loved practical jokes. He played them on me and his uncle and on my folks, his grandparents. He must have gotten some of it from his father, who also loved a good joke. Some of my favorite memories are when Eric’s father hid in the attic and scared Eric and the time when Eric traveled with us to Williamsburg. We were at Busch Gardens and he bought some gags, including some trick black soap. Back in the hotel, he set the soap up on his uncle and was puzzled when the gag didn’t work as planned. Eric marched into the bathroom and got the black stuff all over himself and we all had a big laugh. 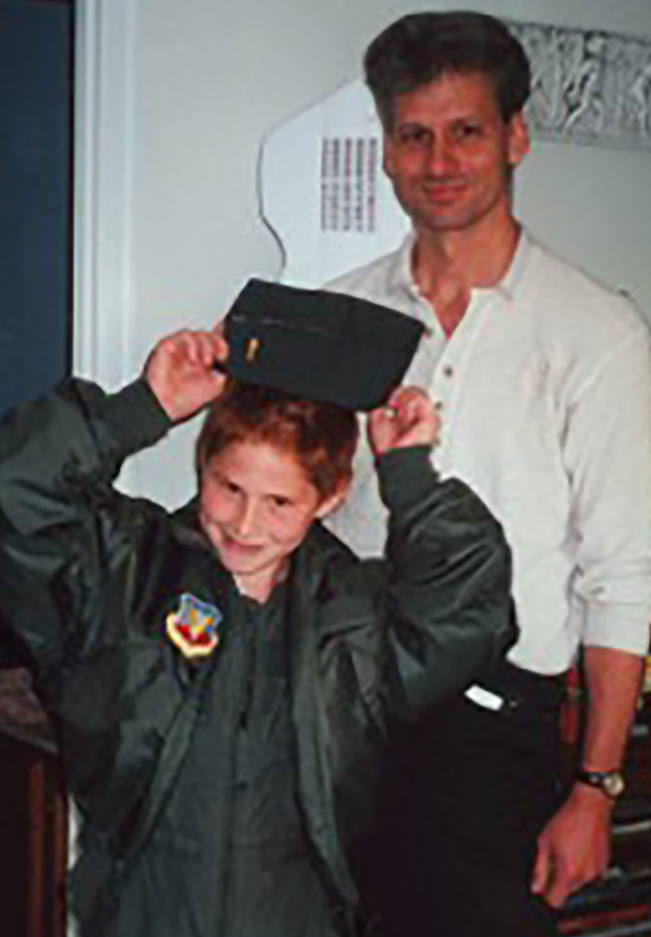 Eric was a hugger and gave great hugs even as a child. As he was quite tall and strong as an adult, he continued to give amazing hugs his entire life. When you were in Eric’s arms, you felt loved and safe.

Eric spent lots of time with us, during the holidays and also at other times. For a significant period during his life, Eric lived close enough so that I could be very involved in his life. We were together at every holiday and during many, many other occasions and trips with his father and sister. Eric loved the family functions and he loved accompanying us on trips. Some standout memories are camping on the astronomy field in Cherry Springs, trips to Hawk Mountain, travelling to Williamsburg, trips to the Jersey shore or Delaware beaches, as well as local trips for shopping or to a park. Even as a teenager bordering into young adulthood, Eric was a joy to have at holidays or on short or long trips. His love of learning and experiencing meant he was engaged and present and enjoyed himself.

On several occasions, Eric would be over and we would decide to just go to the recipe book and pick something out that sounded good to eat. We would make a list and go to the grocery to get supplies and then we would make the recipe together. He would excitedly help set the table and the atmosphere, as we chose the china and flatware, lit candles and turned the lights down. He loved helping and learning to cook and he loved dinner parties.

Eric loved his “Mom-mom” and “Pop-pop”. For much of his life, he lived close enough to walk over and drop in, which he did regularly. Eric’s folks made sure that he had regular time with Mom-mom and Pop-pop so that there was a healthy relationship. Eric lived with Mom-mom and Pop-pop for about a year at one point and created an even deeper bond than before. Eric remained very close with his grand-parents up until his death. He would always stop in when in town for holidays or when on leave. I know from speaking to Alexandra and his unit mates that he spoke very highly of Mom-mom and Pop-pop and genuinely enjoyed the relationship and their guidance.

Eric was always interested in helping with my creative ventures. He would come over just about every chance he could in order to help play test and read the stories. He would comment thoughtfully and creatively. He was quite creative in his own right and was capable of writing with great skill for his age. He was very proud when he saw my first created game in the window of a local book store. I think he always loved being part of a team and building a connection.

As Eric became an adult and decided to make more of his own choices in life, it was gratifying to see him make decisions based more on his desires and less on his perception of what others wanted from him. It was especially gratifying to meet Alex and to see how much in love the two of them were. I find it tragic that they ultimately split and did not find their way back together, as I considered them perfect for each other. I’m not sure anyone, even Alex, knows for sure what the reasons are that Eric sabotaged the relationship by choice, which I feel he most certainly did. At least he did experience true love for a while and got true love in return. I know that Eric continued talking to Alex about reconciling, even on the day of his suicide. I feel that Eric was unwilling or unable to allow her to fully understand the depths of his despair.

Everybody in Eric’s family supports our military and our country and we were all proud of Eric as we heard about his progress in boot camp and initial training.

I first noticed a dramatic change in Eric during a Christmas holiday when he visited for dinner with Alex. He had returned from a tour in Afghanistan and he was markedly different to me. I saw a seemingly confident man, bordering on arrogant bravado. The sensitive and gentle side of him seemed gone and I saw a deadness in his eyes. I did not know it at the time, but in reflection, I think his optimism and innocence had left. Having never experienced armed conflict and its many terrors, I cannot easily nor fully understand how profoundly those experiences would affect someone, but I accept that it must be cathartic and life-changing and that he could never have been the same. At the time, I just prayed that he would survive and that we would all do whatever needed to be done after he was through in order to restore some of his former self.

It was helpful to speak to many of Eric’s unit, those people that did know him well up until the final moments, in some cases. Although not all of them agree on everything they say about the hows and whys of Eric’s descent into suicide, there were several things upon which they did agree. The primary message from all of them was that Eric was a bona-fide war hero who put his own safety after the safety of his unit and mission objectives. The simple fact that his unit mates went to the effort they did to attend Eric’s memorial services speaks to the esteem in which he was held. In my mind, it goes back to his choice to master something and his tendency to put others’ needs before his own.

It is nevertheless tragic to me that this beautiful and sensitive person managed to be so profoundly changed to the point where he decided that he could live no longer. I am saddened and angry at myself for not heeding the warning signs. In my mind, an even greater tragedy is that it seems we haven’t yet recognized that these signs exist and have not instituted methods for intervening and helping to heal the psychic wounds that lead to such a waste of life.

“The greatest danger for most of us is not that our aim is too high and we miss it, but that it is too low and we reach it”. ~ Michelangelo Buonarroti

SEND US A MESSAGE

When you believe in your purpose, you can work through obstacles, overcome disappointments and endure hardships. We will help you do this.

Together We Can Light up America!
info@theerikfoundation.org